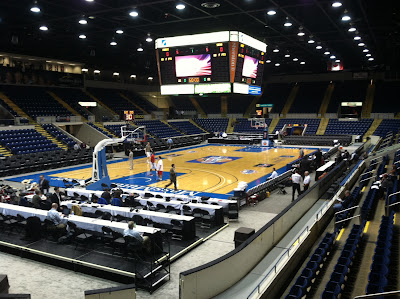 SPRINGFIELD - Sports fans in Western Massachusetts may take the MassMutual Center for granted, but as fans who made the trip to Springfield this weekend found out, the arena and the city prove to be perfect hosts for the Metro Atlantic Athletic Conference Basketball Championships.

Attendance for Sunday's men's semifinals was 2,421.  Many of the fans had traveled from member schools, and they expect a fine venue and a neutral location for the tournament.

With ten men's and ten women's teams making Springfield their home for the weekend, the city provides excellent hospitality for the teams and fans throughout the tournament.  From the vast selection of nearby hotels and restaurants, the MassMutual Center becomes a very accommodating venue for a tournament of this size.

The venue becomes an even better host when the use of the connected convention center is factored in, allowing the MassMutual Center to host games and community events back-to-back, within the same facility.  The MGM Springfield FanFest has been entertaining younger fans all weekend, within a few hundred yards from the arena floor in the Exhibition Hall.

Earlier on Sunday, the tournament and the Naismith Memorial Basketball Hall of Fame held a one-mile "Bounce to the Arena" from the Hall of Fame to the MassMutual Center, ending at the Exhibition Hall's FanFest.  A tournament needs a suitable venue for hosting events such as this, and the MassMutual Center and the city of Springfield have partnered together to put on a fine weekend of basketball.

Aside from the events that go along with the tournament, Springfield's location in the region offers as close to a "neutral site" as there can be.  With the closest schools being Fairfield and Siena, the 6,663-seat MassMutual Center (excluding floor seating for basketball) is both fair for the fans, and a the right size for a conference tournament.

Accommodating a strong media presence throughout the weekend, along with nationally televised games on ESPN2 and ESPNU scheduled for Monday, the MassMutual Center shows why it makes the right choice as host of the MAAC Basketball Championships.