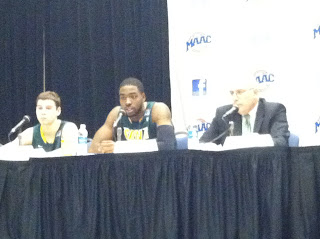 SPRINGFIELD - For anyone with an interpretation that the Metro Atlantic Athletic Conference does not attract a wide amount of interest, Saturday at the MassMutual Center would prove that opinion wrong.  While once again the majority of fans in the arena were those of the member schools, not from Western Massachusetts, the media coverage picked up in day 3 of the weekend-long tournament.

Saturday included two women's semifinals and four men's quarterfinals, all of which were broadcasted nationally on ESPN3.  ESPN3 is available on WatchESPN.com or on the WatchESPN app.  Attendance for Saturday was not released, but crowds were similar to those on Friday which relied heavily on fans traveling from member schools.  Friday night's attendance was 2,038.

National broadcast coverage will continue with all remaining games being televised on the ESPN family of networks.  The two men's semifinal games tomorrow will be broadcasted by ESPN3, along with the women's final on ESPNU on Monday.   ESPN2 will cover the men's championship game Monday night at 9.

All of this national television exposure is beneficial for growing the popularity of both the tournament and the league itself, as all eyes in the basketball world are now centered on who will make it to the NCAA tourney.

This is where Springfield comes in.  As the host city, this will be one of Springfield's few opportunities all year to be on national television - the others being the Hall of Fame Induction and the Spalding HoopHall Classic.  There has been a good amount of media members occupying the press tables all weekend long, helping to maximize the exposure of this tournament.  All of which aids Springfield, as it is just another benefit of hosting the MAAC Basketball Championships.