Day 2 of the Basketball Hall of Fame Tip-Off Classic featured four games broadcast on the ESPN family of networks and a great crowd to witness the final day of the weekend-long tournament.  The announced attendance came after the second game which saw Providence top Notre Dame 75-74 before 6,513 fans.

UMass and Florida State lead off the day with a noon start televised live on ESPNU.  As this game was immediately followed by Providence-Notre Dame, attendance was announced after the second game.  A crowd of 6,000-plus fills out the 9,323-seat Mohegan Sun Arena enough to create good atmosphere, making the second day of the tournament another off-the-court success.

Staging the tournament at Mohegan Sun is greatly beneficial for the Hall of Fame, as the resort casino makes for a weekend getaway for fans coming to attend the tournament.  In addition to basketball, having Mohegan Sun as a venue allows fans more opportunities than just gaming, but also to dine at plenty of great restaurants, visit the Shops at Mohegan Sun, or even stay overnight at the hotel and spa.

The eight-team, two-day tournament was played as the Tip-Off Classic between 1979 and 2005 at the Springfield Civic Center/MassMutual Center.  Having the tournament at Mohegan Sun allows fans to come from all over the region and enjoy all that the resort casino has to offer, making the Tip-Off Tournament more enticing to fans visiting from areas throughout the Northeast. 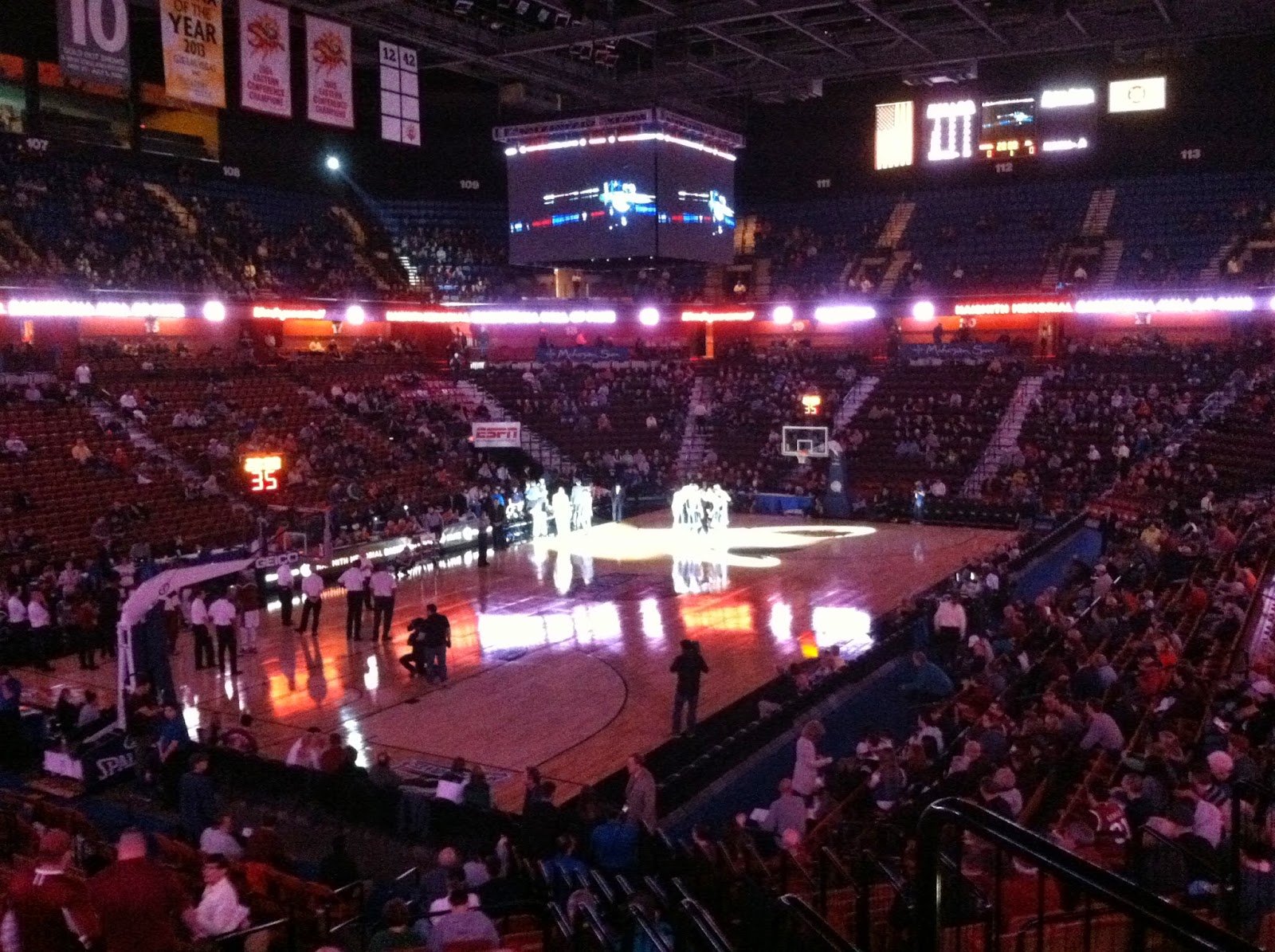 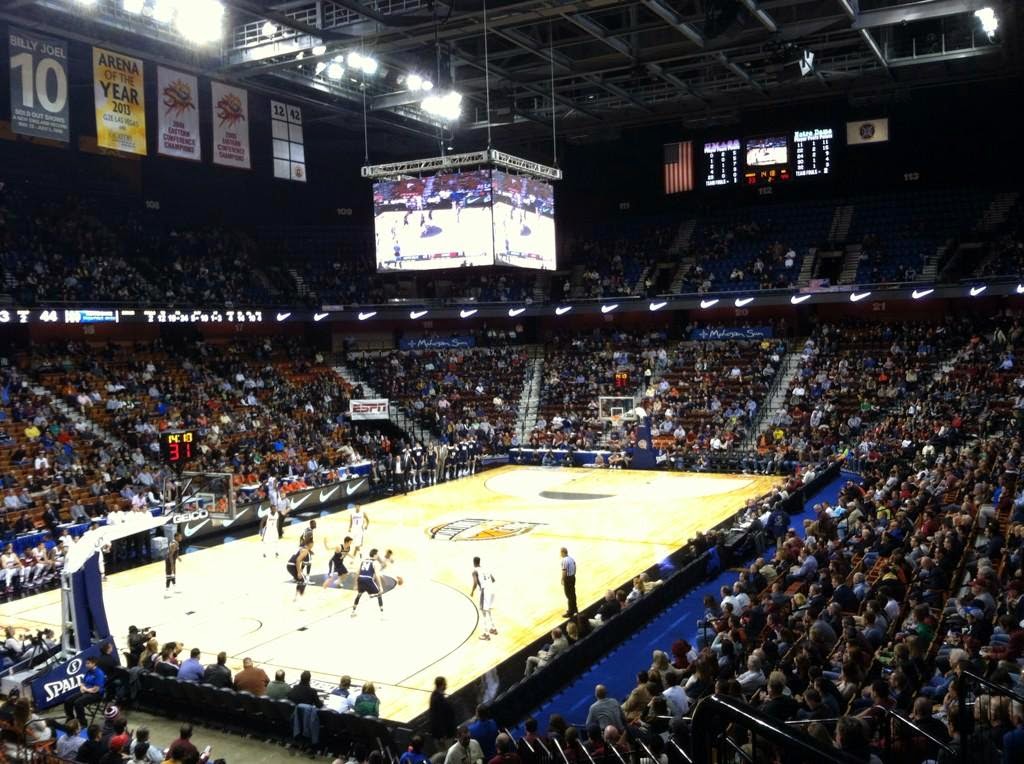 Coverage of the Hall of Fame Tip-Off Tournament

The 2014 Basketball Hall of Fame Tip-Off Tournament will be at Mohegan Sun Arena this weekend, and Western Mass. Sports Biz will be there to cover the event.  Check back here for analysis and pictures from the tournament.

The eight-team, two-day tournament was played as the Tip-Off Classic between 1979 and 2005 at the Springfield Civic Center/MassMutual Center.  The event will feature all eight games broadcast live on ESPN networks, one on ESPNU, and the remaining seven on ESPN3.  It is the only exempt NCAA Division I college basketball tournament in New England, where teams receive exempted status for scheduling.

The 9,323 seat Mohegan Sun Arena in Uncasville, Connecticut opened in 2001, and rivals TD Garden for the biggest concert tours in New England each year.  The arena has won many awards, and is ranked 3rd in the U.S. by Billboard Magazine.

If you can't make it, check back here this weekend for coverage from the weekend-long event.

Western Mass. sports and entertainment to benefit from MGM Springfield

As MGM Resorts International moves into the next phase of the development of their $800 million resort casino in Springfield, the sports and entertainment scene in Western Massachusetts is about to change along with the project, helping the city move toward becoming a vibrant entertainment destination.

MGM has long discussed their intent in including the MassMutual Center in their entertainment plans.  Having a company like MGM with deep ties to the entertainment industry will help Springfield attract popular events and benefit businesses throughout downtown and the entire region.  Examples such as this will hopefully be the economic effect this region has been hoping for with the Expanded Gaming Act, a law passed in 2011 that allows up to three resort-style casinos and one slots parlor in Massachusetts.  But what about already established sports and entertainment entities in Western Mass. such as the Springfield Falcons or the Basketball Hall of Fame?

For the Springfield Falcons, an influx of people in downtown Springfield can only mean a better opportunity to attract fans, especially those staying at the resort casino overnight in the proposed hotel tower.  As for sponsorship, MGM Springfield has already sponsored the Falcons since 2012, and continues to be an extremely visible sponsor to this day.  MGM Springfield has multiple one-ice advertisements at the MassMutual Center.  MGM also showed its support of local sports as a sponsor of the Springfield Armor, becoming the team's presenting sponsor in 2013-14.

The Basketball Hall of Fame will also benefit from the presence of the resort casino.  MGM has already hosted multiple events at the Hall of Fame, including a career fair that attracted more than 600 last month, and an event held during the election on November 4 where hundreds of MGM supporters gathered to await and later celebrate the results of Ballot Question 3.  While the Hall of Fame is already a major, if not the biggest tourist attraction for Springfield, the opportunity to have a resort casino destination just blocks away will prove to be extremely beneficial to the museum.

Sports and entertainment has a long history alongside resort casinos, and hopefully that history will continue here in Springfield.  Fortunately for the region, MGM has a rich tradition of hosting first-class concerts and sporting events, which will give Springfield the potential to become a destination for sports and entertainment in the region, competing with venues like the XL Center in Hartford and the Mohegan Sun Arena in Uncasville, Connecticut.

In terms of infrastructure and transportation, Springfield will find itself in a competitive position once the doors to MGM Springfield open for the first time.  Springfield's location in the region at the crossroads of Interstate 91 and Interstate 90 should attract casino-goers everywhere from Albany to the West, Vermont to the North and Hartford to the South.  The renovation of Union Station in downtown Springfield coupled with the planned commuter rail from New Haven will be a much needed boost to the region's transit needs, allowing more people from across the region to access the revitalized downtown.  The new Union Station will become a hub of transportation in the Pioneer Valley, creating a combined station for Amtrak, the proposed commuter rail, Peter Pan, Greyhound and the PVTA.

Like many small markets, larger sports and entertainment events have overlooked Springfield for decades.  The Springfield Civic Center opened in 1972 and has had many major tours over the years.  Today, those are few and far between.  The renovation of the Civic Center in 2005 was supposed to lure more concerts and events into the potentially 8,000-seat arena, but to this day the venue only sees a small handful of concerts each year.  MGM Springfield now presents the opportunity to bring Springfield back to a city where first-class entertainment can be found year-round.  The proximity of the MassMutual Center to the resort casino will create an opportunity for the arena and casino to feed off of one another, in a way many casinos cannot offer.  Many current and proposed casinos do not have large arenas, giving Springfield the opportunity to be a true destination for entertainment, and a major player throughout the region in the competitive entertainment industry.

Zach Baru can be followed at @zbaru and reached at zachbaru@gmail.com.