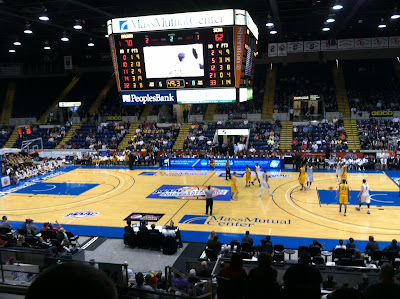 SPRINGFIELD - While the Metro Atlantic Athletic Conference Basketball Championships are in full swing with teams battling for a berth in the NCAA tournament, there is a much smaller game going on within the MassMutual Center at the MGM Springfield FanFest.  About two hundred yards away in the Exhibition Hall, the evening's lesser-known event is underway at the FanFest, the much anticipated "Mascot Game". 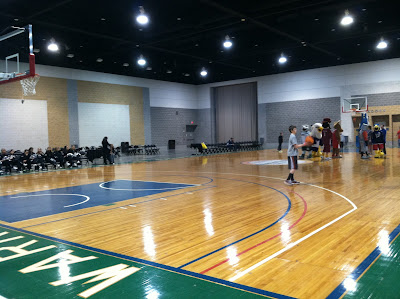 Okay, maybe most adults are more excited for Monday's championship games.  But for any children who are attending the weekend-long tournament, the choice of which game to attend on a Saturday night is simple, with the mascots coming up on top.  This game is just one of many events planned on the auxiliary court inside the Exhibition Hall, as part of the FanFest.

Other events on the auxiliary court include free throw contests, three-point contests and every kid's favorite - "open court", which is open to the public.  The court is a full court set-up, which is a former floor from the Glen Falls Civic Center in Glen Falls, New York, along with two baskets.  In other words, paradise for kids who are not necessarily focused on the two college teams playing in the arena.

As if the auxiliary court is not enough excitement for the kids, the FanFest includes many large inflatables for kids to play on.  Booths are also set-up for adults including the tournament's schools and the Greater Springfield Convention & Visitors Bureau.

The FanFest is a perfect example of how a tournament can use promotions to provide family entertainment, keeping kids engaged and having fun, while not having to walk far from the arena floor.