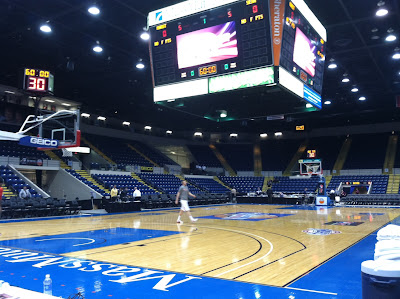 SPRINGFIELD - For any tournament, economic impact is a main factor in determining the success an event has on its host city.  At the 2013 Metro Atlantic Athletic Conference Basketball Championships, the impact the tournament has on Springfield becomes immediately evident upon entering the building.

The MassMutual Center may not be packed with fans - or anywhere near capacity for that matter - but during the early rounds, the economic benefits from the teams themselves can clearly be noticed.  Situated around the arena are groups from the ten different teams represented in the weekend-long tournament.  And while a team of basketball players may not be a significant impact on an economy, when combined with coaches, trainers, staff, parents and fans from the ten different schools, including both men's and women's teams, the economic affect on Springfield starts to emerge.

Fortunately for Springfield, many of these teams and their groups are not camped out inside the arena watching games on a Thursday afternoon.  Instead, there is the potential for them to support local restaurants, stores or any establishment that may attract visitors in the area.  Springfield comes out a winner even before the thousands of fans who will enter through the arena's turnstiles show up.

More than 16,000 fans attended last year's tournament, which greatly aids the region's hotels, restaurants and shopping destinations.  Local hotels have experienced high demand for this weekend, reassuring the city of great benefits that are still yet to come.

There is no doubt that the tournament will need good numbers at the box office, including strong local support, but it is hard to argue that the tournament is a success for the region regardless of any final attendance numbers.  The trick will be to keep it here, and ultimately that will be defined by support of local fans right here in the Pioneer Valley.