The City of Springfield waited for an entire season without AHL hockey, and on October 15th and 16th, hockey returns to the region with fans in dramatic fashion.

The American Hockey League's return to Springfield comes one day after American International College faces local rival and national champion, the University of Massachusetts.  Any UMass appearance in Springfield would be a big game, as the team has previously played games at the formerly-named Springfield Civic Center. 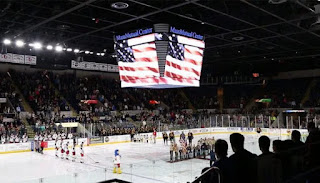 In the renovated MassMutual Center, the venue is now home to the city's NCAA Division I hockey team, American International.  The MassMutual Center has served as AIC's home ice since the 2016-17 season, after the team switched home venues from Olympia Ice Center in West Springfield, Massachusetts.  UMass, coming off a 2021 NCAA Frozen Four championship, has heated up an already interesting rivalry between the two D1 schools who are just 23 miles apart.

The very next evening marks the return of AHL hockey to a city with a storied history in the league.  AHL hockey began in the city in 1926, when the Springfield Indians began playing at the Eastern States Coliseum in West Springfield.  The Indians became the Kings during the franchise's affiliation with Los Angeles, became the Indians again, and moved to Worcester in 1994.  Fortunately that same year a group was established by Bruce Landon, a long-time Indians great and General Manager of the franchise after his playing career.  The Springfield Falcons were born, moved to Tucson in 2016, but once again Landon was able to save the city's AHL franchise and helped put together a new ownership group with Majority Owner Paul Picknelly.  The Thunderbirds were established, and although COVID-19 cancelled their 2020-21 season, the franchise returns in October 2021 for a new season at full capacity.

There are many reasons for hockey fans in Springfield to celebrate with a big October weekend of hockey.  Hockey is back in Springfield at both the pro and Division I levels, not only serving hockey fans, but providing a much-needed boost to the local economy.  As the fans return to downtown Springfield, restaurants, shops and hotels will all see increased business, one of the many positive impacts the city will see as hockey fully returns.

Zach Baru can be followed @zbaru and reached at zachbaru@gmail.com.
Tweet
No comments: