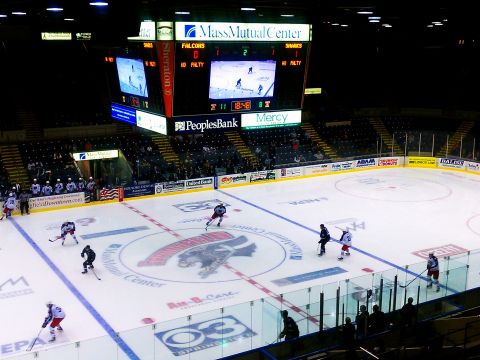 Zach Baru can be followed on Twitter @zbaru and reached at zachbaru@gmail.com.
No comments:

As if Friday’s record attendance at the Springfield Armor of 6,061 fans was not enough, the Springfield Falcons responded with a sell-out crowd of 6,789 on Saturday.  Springfield may be a small market, but their fans did not make it seem like one over the weekend.

This is encouraging news for our local teams, as support is coming at a much needed time, with the playoffs right around the corner.  Friday was the Armor’s last home game, but they have clinched a playoff spot, and are currently one game behind Dakota for first place in the NBA Development League’s East Conference.

Even more interesting than Dakota actually being in the D-League’s East Conference, is that the Falcons are 4 points out of the playoffs, currently eleventh in the American Hockey League’s Eastern Conference.  The Falcons have two more home games on the schedule, giving them an opportunity to pack more crowds into the MassMutual Center.

Last year in the 2010-2011 season, the final home game for the Armor drew 4,489 fans, showing a modest increase in support this season for the first place team.  As the Falcons look to their home finale April 14, they hope to have a similar attendance to last year’s crowd of 5,723.

To all of the doubters out there that say Western Mass. does not support their teams, last weekend was an example of the potential this market has.  Our teams do not need 6,000-plus crowds every night to survive, but rather consistently decent attendance to show the community’s support for their teams.  For this to be achieved, the fans and the teams must work together to do their part.  The fan’s part is pretty clear, but good marketing and affordable ticket prices need to continue from our teams to ensure bodies are put in the seats.

There is absolutely no reason why Springfield sports have to be associated with attendance problems.  How often have you glanced down in an article about local sports to check the attendance before the score?   Unfortunately, this has been the world we have been use to for quite some time.  It does not, and should not have to be like this.  The region needs to realize that we have the potential to support our teams, and last weekend was a great example that local fans truly can come out in numbers.

Zach Baru can be followed on Twitter @zbaru and reached at zachbaru@gmail.com.
No comments: