UNCASVILLE - As a weekend of Division I basketball begins, the Mohegan Sun Arena proves once again to be a perfect host to the Basketball Hall of Fame Tip-Off Tournament in Uncasville, Connecticut. 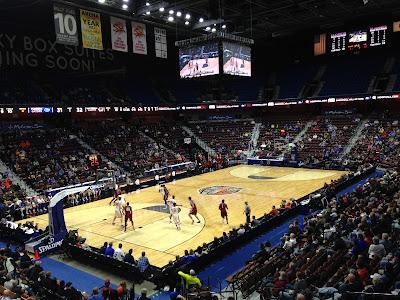 One has come to expect quality basketball at a first-class venue at the Tip-Off tournament, and the 2015 edition has shown nothing less as Purdue, Old Dominion, Florida and Saint Joseph's all faced off to begin the weekend-long tournament.


The afternoon began with Purdue and Old Dominion tipping off at noon.  Purdue easily held off Old Dominion 61-39 before a decent Mohegan Sun Arena crowd.  Attendance will not be made available until later in the evening, but the arena's lower level was modestly full, while the fans in the upper level were sparse.

In game 2, Florida topped Saint Josephs's 74-63.  The afternoon's second game was played before a slightly larger crowd, although an official attendance was not available at the time of this post.

The four teams seemed to have a relatively even level of support, as no one team dominated the arena.  In the casino, mall and hotel, fans could be found everywhere, further proof of the level of hospitality provided by hosting the tournament at Mohegan Sun.

Check back all weekend long for more updates from the Tip-Off Tournament as Western Mass. Sports Biz will be covering the entire weekend of action right from inside the Mohegan Sun Arena.