Television exposure does not look to be an issue this season for the University of Massachusetts men's basketball team, as ten games are scheduled to be televised across three different networks for the upcoming season. 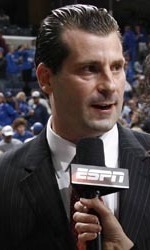 NBC Sports Network will broadcast five games in the 2015-16 season, including the 2015 Basketball Hall of Fame Holiday Showcase at the MassMutual Center on December 5 against Ole Miss.  This will be the fifth year the Hall of Fame has hosted the Holiday Showcase at the MassMutual Center, a great opportunity for Springfield fans to catch UMass basketball downtown.

CBS Sports Network will be carrying four games, including the December 21 game against Providence at the Mullins Center.  This game will be a "maroon-out" in Amherst, with 2,000 students receiving t-shirts.

The lone game on the ESPN family of networks will be televised on ESPNU when the Minutemen host VCU in Amherst on February 11.  This game will be a "white-out" game at the Mullins Center, again with 2,000 students getting t-shirts.

Additionally, an eleventh game will be televised on NESN when UMass visits Harvard in Cambridge on November 17.  This will be the first game of the season to be televised.

What all of this television exposure brings is a tremendous opportunity for the Minutemen to reach fans nationwide, promoting the brand of UMass basketball.  With conferences such as the ACC and Big 10 dominating television, fans of UMass will likely be satisfied with the coverage available during the upcoming season.  For the Minutemen, if they are any less than satisfied, there is one simple ingredient to assuring more airtime - winning.