UNCASVILLE - It may be easy to dismiss Mohegan Sun Arena as a local venue, but as it is often the closest location to Springfield for major events, the one-hour trip is well worth the ride.

For Western Mass. basketball fans that made the trip down Route 2 to see the 2012 Basketball Hall of Fame Tip-Off Tournament, they were treated to competitive basketball in a state-of-the-art venue.  Although there were not any sellouts during tournament in the 9,323 permanent seat arena, the venue still was the perfect fit for the eight games, many of which included raucous crowds from regional teams' fans making the trip to Uncasville. 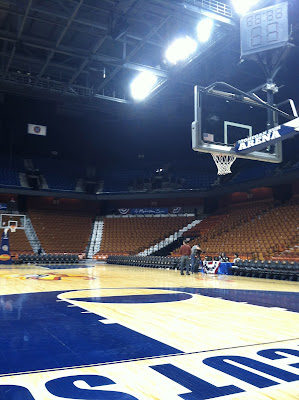 Even for Ohio State, as they just won the Naismith bracket's championship, the crowd actually erupts into multiple Buckeye chants.  On Sunday, the tournament had a smaller crowd than the first day, when 6,003 fans came out to see the four division I games.

For next year's tournament, there is not a better venue it could be played, as Mohegan Sun Arena certainly gets the job done hosting this weekend-long event.  Best of all, it accommodates television well, as a national broadcast for the tournament is essential.

The arena is a first-class venue, that is ranked 3rd in the U.S. by Billboard Magazine.  It's high ranking is for a reason, this arena is a modern and intimate arena that is perfect for any event, small or large.  It routinely attracts the largest worldwide concert tours, being just large enough to still have the feeling of a stadium concert.

There literally is not a bad seat in the house, with two levels of seating, and a design that supports excellent acoustics.  Just walking through the concourse, there is an attention to detail that cannot be found in many other arenas.  Make no mistake about it, this is the home away from home for Western Mass. entertainment.