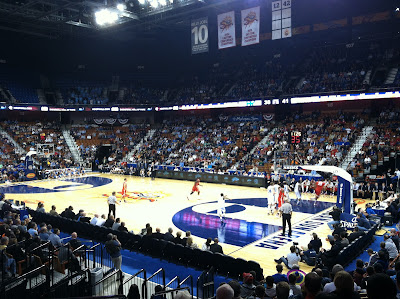 UNCASVILLE - On the first day of the 2012 Basketball Hall of Fame Tip-Off Tournament, 6,003 fans came out to Mohegan Sun Arena to see a first day of hoops for division I teams including Ohio State and Rhode Island.  The total attendance accounts for all four games, which featured very lively crowds for the ESPN3 national audience.

Ohio State versus Rhode Island was the marquee game, in which Mohegan Sun Arena became Rhode Island's home court for a day.  Many of their fans filled the seats, and cheerleaders from Rhode Island made the trip down I-95, making for a boisterous crowd.  The support did help Rhode Island at times in the first half, as they kept it interesting trailing 30-26.  But Ohio State was just too much in the end, winning 69-58.

The next game between Seton Hall and Washington was also decently attended, as a large following of fans made the trip through New York from Seton Hall.  It became a "home" game for Seton Hall, whose fans were extremely rowdy, making for a very entertaining game which went into overtime.  The loud fans were not enough for Seton Hall, as Washington went on a 13-2 run in the overtime period, capturing a 84-73 win.

Two games were broadcast on ESPN3.  Tomorrow in the tournament's Naismith bracket final, ESPN2 will broadcast Ohio State versus Washington at 4:30 p.m.  ESPN3 will also broadcast Rhode Island versus Seton Hall at 7.

All in all, it was a great day of basketball at Mohegan Sun Arena with 6,000 fans and spirited crowds supporting their teams.