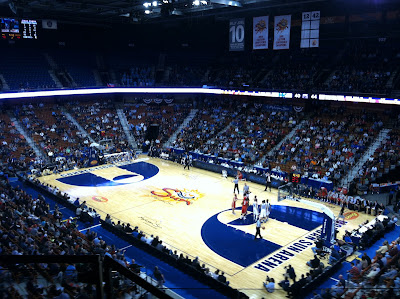 UNCASVILLE - The 2012 Basketball Hall of Fame Tip-Off Tournament may be a neutral site for all games, but in reality, it can often become a home game for the regional teams.  And while the teams making the trip to Connecticut who are not close enough to bring along their fans may not like it, the energy in the arena when a regional team plays is something many other tournaments cannot replicate.

In the last of four games today, Seton Hall just tied the game off a three pointer with 9:13 remaining in the second half.  The crowd of almost entirely Seton Hall fans at Mohegan Sun Arena went absolutely wild.  As their opponent is Washington, this is virtually a home game for Seton Hall, as what happened earlier in the Rhode Island game versus Ohio State.

With so many of the regional teams' fans making the trip to support their teams, the Tip-Off Tournament is different from many of the other tournaments that are taking place this time of the year in college basketball.  Many tournaments only have one regional team, or in the case of the Battle for Atlantis, the only fans in the venue are on vacation in the Bahamas.

Such is not the case at the Tip-Off Tournament, as three of the eight teams are regional, making the crowds much different than most tournaments.  The crowds have been loud and very much into the game, something that makes this tournament special.

This is a good compromise, creating a weekend-long event at Mohegan Sun Arena that is not only extremely competitive, but energetic and entertaining as well.

Zach Baru also blogs for Sports Business Boston.  He can be followed on Twitter @zbaru and reached at zachbaru@gmail.com..