Thunderbirds set to return to the ice for 2021-22 season

The Springfield Thunderbirds of the American Hockey League announced last week they will return to the ice to play in the 2021-22 season this fall.

The target start date will be October 16, and the team is hoping to be able to allow full capacity at the home games this season according to Nate Costa, President of the Thunderbirds.  Built in 1972 and renovated in 2005, the MassMutual Center, the Thunderbirds' home venue, seats 6,663 fans for hockey games. 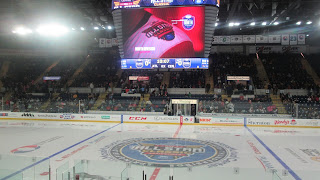 The news comes with great relief to local businesses in the downtown area who have been suffering throughout the entire pandemic, but also hit even harder by the loss of 38 hockey events that bring fans into restaurants, bars, hotels and shops in Downtown Springfield.

Local businesses - the ones that are fortunate to remain - are hoping to pick up where they left off before the pandemic, typically welcoming patrons before and after Thunderbirds games.  Away teams, coaches, staff, and media support local hotels, along with occasional fans traveling for away games.  The restaurant and bar scene in Downtown Springfield were arguably impacted the most, as many downtown establishments see a noticeable difference between nights when there are Thunderbirds home games and nights when the team does not play.

Aside from the local business owners at these restaurants and stores, all staff including servers, bartenders, bar-backs, managers and cooks have lost a tremendous amount of tips and hours without downtown events brining in customers on a weekly basis.

As the country continues to become vaccinated, and life slowly moves closer to normal, the local economy in Springfield will soon get a much needed shot of life pumped into the downtown.  As the Thunderbirds are set to play a key role in Downtown Springfield's revival, the relief for all employees at local businesses cannot come soon enough.