Springfield will need to fill void left by departure of MAAC 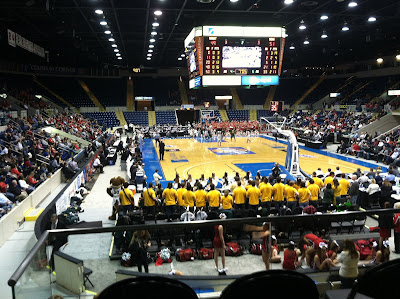 The stands in the MassMutual Center may not have been packed last March, but anyone interpreting that as a reason not to worry about the loss of a tournament troubled with attendance problems needs to consider the affects outside the arena, and in the local economy.

The Metro Atlantic Athletic Conference Basketball Championships will be leaving the city of Springfield after 2014, resulting in a major economic blow to the entire region.  Business from hotels to restaurants, and any store in between that attracts travelers from out of state, will be affected by the loss of the tournament.

Attendance this past March was 14,394 for the entire tournament, partly the result of a low turnout from local fans.  In defense of the Pioneer Valley, the conference does not have any teams from Massachusetts, leaving Marist, Siena and Fairfield as the closest schools.

Although attendance was low, the economic impact was still significant.  The tournament attracted twenty men's and women's teams combined, which in addition to the players, coaches and trainers, also accounted for groups of students and families making the trip and calling Springfield home for multiple days.  It is this economic activity that helped pump money into businesses throughout the region, helping business owners and employees alike - just ask any server depending on tips who works at a nearby restaurant.

With economic impact, everything adds up to make a difference in a region.  This is the void the Pioneer Valley will be feeling come March of 2015 when the tournament returns to the Times Union Center in Albany.

With the MassMutual Center and the Greater Springfield Convention and Visitors Bureau placing a bid to host an NCAA Women's Basketball Tournament Regional in 2014, the city should still continue to seek a replacement for the MAAC tournament come 2015.  The thought of neither tournament taking place in Springfield in 2015 means fewer hotels being booked, less patrons at restaurants, and a true loss for the entire region.