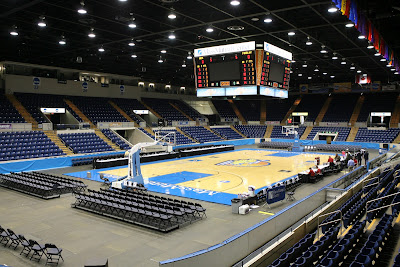 The 2012 Metro Atlantic Athletic Conference Basketball Championships brings a lot more than just five days of basketball to the MassMutual Center, it gives the entire economy of Springfield a much needed economic boost.  Not only will thousands come down to the arena to watch one of the nine different sessions throughout the week, but many will call the city home during the week as hotels and restaurants benefit from tournament.

In the end, the city of Springfield will come out a winner, as five days of Division I college basketball and 20 teams bring money and attention to the city.  ESPN will be here to broadcast 10 games on ESPN3, ESPN's internet and mobile-based network.  They will also broadcast the women's final on ESPNU and the men's final on ESPN2, bringing national attention to Springfield.

At any given moment, tens of millions of viewers are tuned into the networks of ESPN, and Springfield will get another chance of exposure, just as it did when ESPN broadcasted the 2012 Spalding Hoophall Classic at Springfield College's Blake Arena in January.  This time, the spotlight goes downtown to the 7,000-plus seat MassMutual Center.

If the tournament gets 18,000 fans to the arena, it will be looked at as a success.  But this is just the first of a 3-year agreement for the tournament, and it is a great opportunity to get the community and the rest of the region introduced to what hopefully will become a long-term home for the MAAC.  If Western Massachusetts does their part, and semi-local colleges like Fairfield, Siena, and Marist show their support, this tournament has a real chance of being a success at the gate, and for the economy.

Support has been shown from the MAAC, as the conference has been marketing this tournament for months.  Earlier MAAC broadcasts this year on ESPNU and ESPN3 have included promos and even directions to get to Springfield.

At the end of the day, it all comes down to more money being pumped into the city.  This tournament is an excellent opportunity for Springfield to take advantage of economic benefits, and attract attention both at the same time.  You can be sure the hotels and restaurants will do their part to represent Springfield well.  But will it work?  And more importantly, will it stay?  That always seems to be the story here in Springfield.