Thunderbirds off to a top 10 start in league attendance

It's been a wild year for the Springfield Thunderbirds.  The franchise had a playoff run for the ages, making it all the way to the Calder Cup Finals, before losing to the Chicago Wolves at home back in June of 2022.

Sold out crowds during the playoffs, tickets selling out well before the game and only available on secondary markets, a loud MassMutual Center, a taste of the past when the former Civic Center was home to two Calder Cup champion teams in both 1990 and 1991.  But that was the Springfield Indians, and fast-forward to 2022, and two AHL franchises later, the Springfield Thunderbirds have brought some of that nostalgia magic back, at least off-the-ice that is. 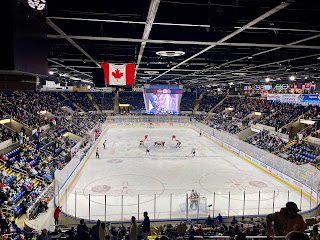 While the team is currently 7-8-0-4 and 7th place in the Atlantic Division out of eight teams, the Thunderbirds are still a top ten team at the box office.  And AHL fans know, in minor league sports, being top ten in attendance is a very, very important stat.  According to HockeyDB.com, the Thunderbirds are currently averaging 5,871 fans per home game, good enough for 10th out of 32 teams in the AHL.  The Cleveland Monsters lead the league in attendance, averaging 8,726 fans per game.

Today's AHL is a lot different than the league of the past, as many teams are playing in large markets, three of which are playing in NBA or NHL arenas (Cleveland, Calgary and Manitoba).  The Thunderbirds are ahead of three large market franchises such as Milwaukee, Toronto and San Jose.  Not to mention other larger markets with NHL teams such as Calgary and Manitoba, both of which are behind Springfield in attendance.

So how does this all pan out?  For a relatively small market of Western Massachusetts, in a city that has a population of 155,929 according to the 2020 U.S. Census, the Thunderbirds are doing pretty good when it comes to the gate.  We are not a city that shares an NHL or NBA team like others in the AHL do, we are not a top 30 media market like other teams are, we are simply Western Mass.  But we are not just a smaller media market, we are one that loves hockey, and has an extremely rich tradition of both great hockey teams and great success.

It's no surprise that the success of the 2021-22 Thunderbirds has lead to large crowds this season, but a level of appreciation should also go to the Thunderbirds' front office, as their marketing plays a very large role in all of this success off the ice.  As the season continues, hopefully the big crowds will as well, keeping Springfield on the map as a true hockey town.