UNCASVILLE - For most basketball tournaments, it is simple: you enter the arena, watch the game, hope you get on the video board, or take part in a contest.  But that is it.  It is completely confined to the venue itself - all about basketball, and usually like any other tournament.

From being at the Basketball Hall of Fame Tip-Off Tournament these last two days, the division 1 basketball is just part of the experience.  The location, as any event, is a major factor in the enjoyment for the common fan. 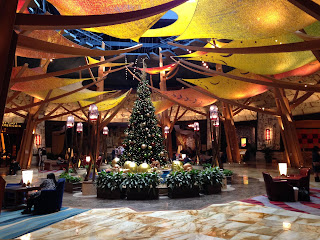 This is why the Mohegan Sun Arena is a fitting choice for the tournament, and why Mohegan Sun provides more than just an arena for the games.

Sitting in the arena watching the games has been very enjoyable.  There has been amazing plays, close games, overtime, a buzzer-beater, you name it.  But its before and after the games that has also been enjoyable, something many other basketball venues just cannot provide.

For the fans, players, players' families, coaches and all of the media, Mohegan Sun gives those involved plenty of hospitality, and entertainment as well.

The 1,200-room luxury hotel is just steps away from the arena, giving teams, media and fans a convenient and quality place to stay.  Additionally, the resort offers a spa, restaurants, bars, clubs, shopping and entertainment such as the free Wolf Den and a comedy club.

Notice how one thing was not included in all of those options - that of course, was gaming.  Illustrating just how much there is to do in the resort.

UNCASVILLE - Day 2 of the Basketball Hall of Fame Tip-Off Tournament highlights the true advantage of having a premier venue such as the Mohegan Sun Arena.

Attracting big name schools such as Boston College, Texas Tech, Northwestern and South Alabama, the 9,323-seat Mohegan Sun Arena provides the setting one would expect for a tournament to be broadcast over national airwaves.  Day 2 of the tournament will see two games broadcast nationally live on ESPN2, with the other two Sunday games streaming live on ESPN3.

For ESPN, this is the type of venue their viewers want to watch a game being played in.  For the Hall of Fame, this is yet another chance to showcase their brand nationally, and even globally.

A Basketball Hall of Fame logo can be found everywhere the eye can see.  On center court, under the baskets, on the benches, and on the scorer's table.  The arena is filled with Hall of Fame logos appearing constantly on the LED ribbon boards in front the balcony.  Even the center-hung scoreboard displays Hall of Fame logos and commercials throughout the game.

The tournament is win-win for both the Hall and ESPN, which broadcasts all eight games throughout the weekend between ESPN2 and ESPN3.

The tough part for the Hall of Fame, however, is filling the seats for the later games, and for Sunday's early game as well.  But throughout the resort at Mohegan Sun, fans can be seen everywhere, from the hotel, to restaurants, to the gaming floor, wearing Tip-Off-related merchandise.

Players, players' families, coaches, media, and fans fill the resort wherever you can look, turning Mohegan Sun into a basketball fan's paradise for Saturday and Sunday.  For the Hall of Fame, Mohegan Sun truly serves as a great venue providing the hospitality and atmosphere needed all weekend long.

UNCASVILLE - The 2017 Basketball Hall of Fame Tip-Off Tournament returns to the Mohegan Sun Arena once again.  And besides having big division 1 programs such as Boston College, Texas Tech and Northwestern, the weekend-long national television coverage is especially important in creating a successful event.

Every game this weekend will be broadcast on one of the ESPN family of networks.  Both ESPN2 and ESPN3 will cover the event, with the ESPN2 televising two games on Sunday at 3 p.m. and 5:30 p.m.  ESPN3 will stream the other six games live.

Having every game broadcast live to a national audience is important to not only the financial side of the tournament, but also the tournament's marketing as well.  In order to create a national appeal and following, the games have to be seen in some way, and there is no better way to do that than with ESPN.

ESPN3's coverage is also important because of the access that the platform provides.  ESPN3 can be streamed on mobile phones, online or on smart TVs, allowing plenty of fans worldwide the opportunity to see the tournament.  This is especially true for millennials, who often prefer to watch sports on their phone.

For the Hall of Fame, being able to promote their brand to a national and even a global audience is very important.  The Tip-Off Tournament has transformed from a one-night event to a two-day, eight-game tournament being viewed all over the world.  For the Springfield museum, this is a weekend that can pay huge dividends in gaining worldwide attention. 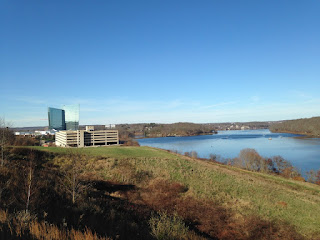 Coverage of the 2017 Basketball Hall of Fame Tip-Off Tournament

The tournament includes four games on both November 18 and November 19.  This year's tournaments will have both national and regional teams competing in the Naismith and Springfield brackets, including Boston College, Texas Tech, Northwestern, La Salle, South Alabama, Maine, Sacred Heart and St. Peter's.

As usual, all games will be televised live on the ESPN family of networks, with all games on Saturday streamed live on ESPN3.  Sunday's games will be split between ESPN2 and ESPN3, with the Naismith Bracket Consolation and Championship games on ESPN2 at 3 p.m. and 5:30 p.m. respectively.

The Mohegan Sun Arena was built in 2001 and has become a leading entertainment arena throughout the nation, attracting some of the biggest names in entertainment.  The 9,323-seat arena has won several awards, including the "Venue of the Year" in 2013 at the G2E Global Gaming Conference in Las Vegas and has won "Casino of the Year" at the Country Music Awards in 2008, 2010 and 2013.

Check back all weekend-long for coverage of the Hall of Fame Tip-Off Tournament from the Mohegan Sun Arena.